Centrally located between the historic Old Market and north downtown Omaha, The RiverFront is a short walk from several hotels, conveniently located along the city’s mass transit system and equipped with ride-share drop off locations. Metered stalls and parking garages are also in immediate proximity. 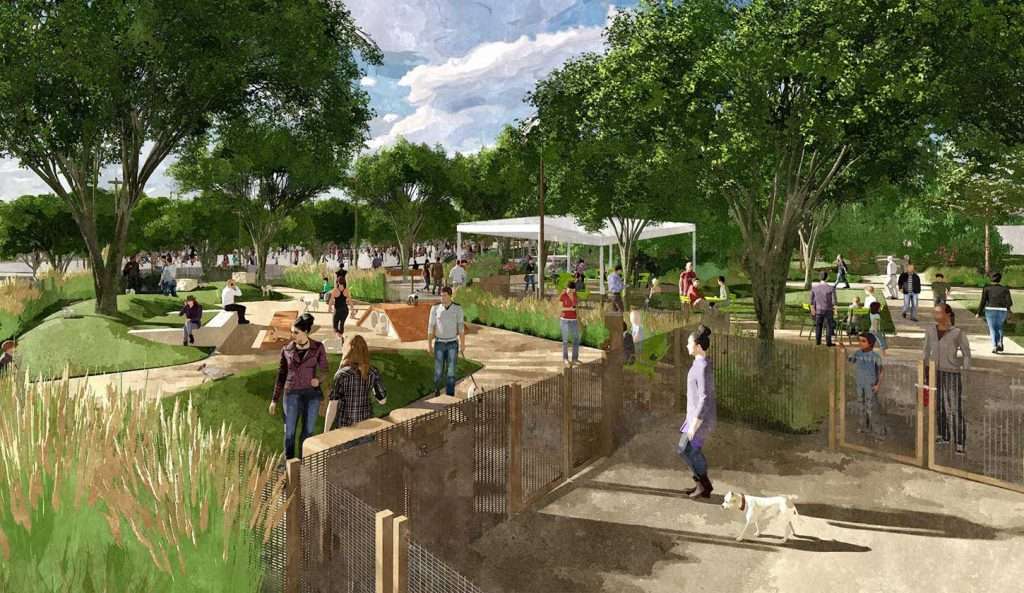 ORBT and Metro Transit bus routes can be found on the METRO website.

You are welcome to:

The RiverFront is a park for everyone, including individuals of varying needs, ages and abilities. Renovations throughout all three parks incorporate gradually or gently sloping pathways, promenades and plazas that may accommodate visitors who utilize a wheelchair or mobility device. Signage placed throughout The RiverFront helps visitors easily identify the nearest accessible route, providing connection to all major attractions and amenities. Additionally, companion seating is available within the park’s various assembly spaces, including along fixed benches and picnic tables.

The RiverFront’s playgrounds and structures are also accessible, with slides equipped with transfer systems, climbing structures that offer interactive opportunities and low impact play features for individuals who may be prone to overstimulation. An identifiable trailway provides a link between each of these areas, with foundations designed to support mobility.

Wheelchair accessible facilities are available in both the public and family restrooms with locations in each of The RiverFront’s three parks. In Gene Leahy Mall, the restroom is located by the Arches Playground near 11th and Farnam Streets. In Heartland of America Park, a restroom facility is attached to the Skate Ribbon Kiosk near 8th and Farnam Streets. In Lewis & Clark Landing, the restrooms are on the east side of the Destination Playground in proximity to the Missouri River. More information can be found in The RiverFront’s ADA Accessibility map below.

For groups of 20 people or more, please fill out the form on this page. Field trips or large groups must notify The RiverFront staff at least one week in advance of a desired date. You may also call The RiverFront office at (402) 599-6565 or contact us by email at theriverfront@omahameca.com to provide the following information: Please review The RiverFront Rules & Regulations before your visit to the park.

What is The RiverFront’s Mission?

The RiverFront is an inclusive, culturally enriching space that creates connectivity throughout the heart of downtown Omaha and reconnects its people with the Missouri River. Robust park programming and daily activities provides unique opportunities to build memories, strengthen the bond of community and cultivate local economic growth.

Where is The RiverFront?

Gene Leahy Mall at The RiverFront will celebrate its grand opening on July 1, 2022. This park spans from Douglas to Farnam, between 13th and 8th streets.

Lewis & Clark Landing at The RiverFront is located along the Missouri River north of Riverfront Drive, with renovations continuing until spring 2023. Follow its construction progress HERE.

Heartland of America Park at The RiverFront is the largest of the three components, just east of 8th Street. This park will open in late summer 2023. Follow its construction progress HERE.

How is The RiverFront funded?

The Downtown Riverfront Trust (DRT) is a private nonprofit created to collect funds for construction and activation of The RiverFront, with the DRT contributing approximately $230 million in generous donations for this massive project.

The City and DRT will each contribute $3 million annually for 10 years to a fund managed by the Metropolitan Entertainment & Convention Authority (MECA) for operation, maintenance and activation costs. The money in this fund will accumulate over a 10-year period for future park expenses. The contract also requires that $500,000 from this fund will be set aside in the capital reserve fund each year for future capital expenses at The RiverFront.

Upon completion of construction, MECA will oversee all park operations and security.

Are there free activities at The RiverFront?

Yes! Most activities held at The RiverFront are free and open to the public. See a full schedule of activities HERE.

Safety has been a primary consideration during The RiverFront’s design and construction process. This is demonstrated with ample and intentional architectural accent lighting that helps with visibility while reducing glare and blind spots, to enhance security throughout.

The RiverFront has a full-time public safety staff on site 24/7 to ensure the safety and security of all visitors.

Where are the restrooms?

Each of The RiverFront’s three parks have permanent restroom facilities.

Is The RiverFront ADA Accessible?

The RiverFront has been engineered to welcome visitors of all ages, abilities and needs. The wayfinding and navigational design throughout the park accounts for the use of wheelchairs and mobility devices.

For more information about accessibility features within each park, click HERE.

Is The RiverFront a sustainable park?

From the start of construction to daily operations, The RiverFront was designed with sustainability and longevity in mind. Visit our Sustainability page to learn more.

Yes, there is free Wi-Fi in the park. Connect to The RiverFront Network to log in.

How do I get there and where can I park?

See the Getting Here section for directions, transportation and parking options.

Please note: Always read and adhere to posted signs, which supersede and may be more current than instructions listed on this website. Citations will be issued by the Omaha Police Department (OPD) and Park Omaha for illegal parking.

How can I support The RiverFront?

Please visit our Support page to learn about all sponsorship opportunities at The RiverFront.

Additionally, The RiverFront has a variety of venues and destinations available for hourly or daily rentals, capable of accommodating a number of events. To host your next gathering at The RiverFront, visit our Reservations page.

To inquire about paid positions at The RiverFront, visit our Employment section. Information about volunteer opportunities will be coming soon.

How can I become a program partner or a food vendor?

For more information about becoming a food vendor at The RiverFront or to learn more about program partner opportunities, please contact us by using the form on our Program Partnerships page.

Are dogs welcome at The RiverFront?

Yes, your canine companion is welcome at The RiverFront! Dogs may run off leash at the Gene Leahy Mall Dog Park located near 8th and Douglas streets; click HERE for a map. The Dog Park features big and small dog sides, furnished with tunnels for crawling, hills for climbing and artificial turf for easy cleanup.

In all other public areas of The RiverFront dogs must be leashed.

We ask that you please clean up after your pets. The Dog Park is open during regular park hours.

How can I help keep The RiverFront clean?

Waste and recycling bins have been placed throughout The RiverFront. We ask that you please dispose of appropriate materials in their identified receptacles.

Is filming or photography allowed at The RiverFront?

As a public park, we reserve the right to use photography of any individual in our promotional materials displayed in print on the internet.

You are welcome to snap selfies and capture The RiverFront’s scenic views.

However, a permit and rental fee are required if filming or photography is for commercial use, will restrict any areas of the park or will use equipment beyond a single tripod. To apply for a permit, visit our rental page HERE.

Yes, recycling bins are located throughout The RiverFront along with water-bottle refilling stations.

Who designed The RiverFront?
The Downtown Riverfront Trust selected OJB Landscape Architecture to design The RiverFront, with the Metropolitan Entertainment & Convention Authority (MECA), HDR and the Kiewit Corporation comprising the overall project team.
How do I plan my event at The RiverFront?
Visit the Reservations page or contact theriverfront@omahameca.com with event planning inquiries.